Kem cho guys? So how was your first day of this Navratri? Being a weekend I’m sure most of you would have gone to the grounds to get some taste of this season. I too had a fantastic time yesterday. I was super excited for this one as it’s the first day of my favorite festival and I also got to be a judge at one of the best Navratri events in Hyderabad. I went there with my family and couldn’t stop drooling over all those pretty chaniya-cholis and kediyus that everyone was wearing with utmost style and grace. People started pouring in on time, couples came in matching attires, kids dolled up so cutely, oldies walking in with big smiles on their face, bevy of gorgeous girls enjoying with their selfie fun and as the band started with their rocking beats, I felt goosebumps all over my body and was waiting for my role as a judge to get over so that I could put on my dancing shoes and enjoy some Garba & Dandiya. I had a tough time judging as everyone was up to the mark and they left no stone unturned to win the contest. There was a couple in their  70’s who were dancing with so much grace and energy that they made me wonder if I could dance like them when I am in their  age, but I guess it’s all about passion and love, which by now I have made clear that I have oodles of it 😉 Apart from the best dressed and best players, there was a special contest yesterday for the best father-daughter/mother-son pair and to my surprise so many of them turned up with such  creative ideas; it feels great to witness so much zeal and enthusiasm. All in all, it was a spectacular show and a perfect start to this Navratri. Now let’s get to my ensemble…

Here is my outfit that I wore yesterday, an off-shoulder dress with a stunning cape and some striking oxidized jewelry.  I wore an alluring velvet cape which touches the floor along with a knee-length one-piece which is made of jute fabric – to give the velvet a better contrast. For the glamour quotient, I chose these metallic accessories which consist of a lovely neckpiece, a stunning kamar-bandh and an armlet or the bajubandh. Also, I wore the traditional nathni and an ear cuff which grabbed a lot of attention. The accessories were the cynosure of my look and without them, my dress would not look as enticing as it did. As my mantra says ‘creativity never goes out of style’, you guys too can rock such an outfit with some funky changes.

That’s it for this one. Stay in touch and have a great time.

Get set for the festivities ahead!

Kurtas and Fusion wear from Naari.

This site uses Akismet to reduce spam. Learn how your comment data is processed. 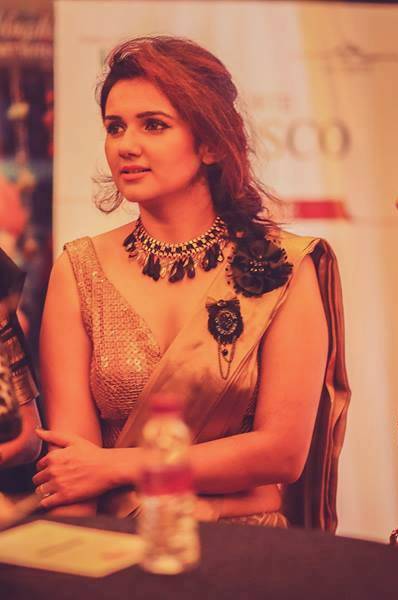 Hello everyone! This is Esha Hindocha from Hyderabad, India. I am here to share my passion for fashion by blogging and creating a good platform for designers who are extremely capable and looking for promotion of their brand at an exclusive level. A good product needs a lot of background work for it to be highlighted, and I plan to collaborate with brands to get the best for all of us with utmost style and finesse. I am looking forward to a great experience with all my clients and viewers.